In the era of automation, an automatic sorting system is highly desirable in approximately every industry. Its main objective is to reduce human efforts and time which can ultimately raise its efficiency.

Material management system(MMS) is a major requirement of almost every manufacturing industry and it can be done through storage, controlling, protection, and sorting with respect to their dimensions, colors using machine vision, or material of an object. An automatic sorting machine performs the task of sorting components according to their different parameters such as materials, sizes, etc.

Draw a ladder logic diagram for an automated sorting system to sort the objects according to their materials (wood, metal, and plastic).

The flow chart of the automated sorting system is shown in the figure below.

Before we see look up to the required input and output tags, we will see the components that will act as inputs and outputs of the automated sorting system.

An automated sorting system consists of 2 pneumatic cylinders that have 2 magnetic position sensors to sense the forward and retract the position of the cylinder. Position of each cylinder act as an input that will further be used in the PLC program.

The pneumatic cylinders are operated with the help of 5/2 double solenoid pilot-operated direction control valves and act as an output generating device in the system.

A flat belt conveyor is operated with the help of an electric motor and it also needs a ladder logic program for its control.

In this example, we have used Siemens S7-1200 PLC and Siemens TIA portal for programming a ladder logic diagram. The PLC we selected has a work memory of 100 kb, 24 V DC power supply with 24V DC 14 digital inputs, 10 digital outputs, and 2 analog inputs on board.

As the conveyor is run through an electric motor, we have used a single push button on/off ladder logic method to turn on and off the conveyor.

When Push Button S1(N.O) is pressed, it turns ON memory M0.1. This will turn ON the conveyor motor 3Y and the conveyor will start. This movement of the conveyor is used to transfer material from one place to another place.

In this network, we have set the sensor memories. The reason to set the memories is that there is a distance between the sensors and the pneumatic cylinders. When the object moves forward, sensors will come to its original form (i.e. N.O/N.C) as they don’t sense any object. This gives misleading input to the actuators.

Hence, in order to avoid this problem, we have set the memory for each sensor when it senses the object.

When capacitive sensor B1 senses the object, it sets its memory B1M and retracts cylinder 1 (Q0.1) and cylinder 2 (Q0.3). Similarly, sensors B2 and B3 set their memories when they sense any object.

It is the main sorting program that decides which object will be sorted at what station. Using this ladder logic program, we have sorted all three materials i.e. plastic, metal, and wood in their respective collectors.

Network 4 shows reset sensor memory. The sensor memories that we set in network 2 needs to be reset to sense the next object. Hence, it is necessary to reset those set memories. 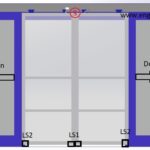 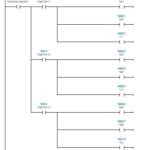 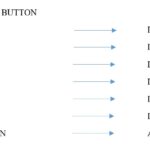 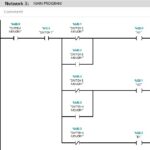