What is Gas Cooled Reactor?

A gas cooled reactor was first developed in the U.K. which uses CO2 as a coolant instead of water and graphite as a moderator. It is also called a Gas Cooled Graphite Moderated (GCGM) reactor.

The basic diagram of the gas-cooled reactor power plant is shown in the figure,

It uses natural uranium as fuel. The coolant pressure is about 7 bar and the temperature about 336 degrees Celsius.

There was another gas-cooled reactor developed in the U.S.A which uses helium as coolant and graphite as moderator. It is called a high-temperature gas-cooled (HTGC) reactor.

The pressure and temperature of the coolant are 15 bar to 30 bar and 800 degrees Celsius respectively.

HTGCR may work up to a thermal efficiency of 40%.

The advantage of using gas as a coolant as compared to water is that it is safe, easy to handle, and most important it can be heated up to any temperature without change of phase at any pressure though the gas has low heat transfer properties as compared to water.

However, while working with gas ass coolant in the reactors, a large rate of gas circulation is required which is supplied with the help of blowers for affecting the required rate of energy transfers.

Therefore, for driving a large number of the blower, a large amount of energy is required as compared to the power needed for running the feedwater pumps in case water is used as a coolant.

Thus, it reduces the thermal efficiency of the plant as compared to water-cooled or liquid-cooled power plants.
Read also: Different Types of Nuclear Reactor

1. Fuels have to be operated at high temperatures.
2. If helium is used in the case of an HTGC reactor, leakage is a major problem.
3. Gases have a lower heat transfer coefficient thus it requires large heat exchangers.
4. A large amount of fuel loading is required.
5. More power is needed for coolant circulation compared to water-cooled reactors. 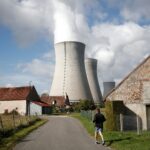 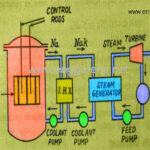 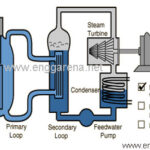 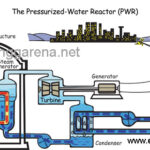