What are Seven New Quality Tools?

New seven quality tools also called seven management and planning (MP) tools are the tools developed by the Union of Japanese Scientists and Engineers JUSE in 1976.

Mostly they are based on operation research work done after the second world war. These tools are meant to promote innovation, information communication, and the successful planning of major projects. 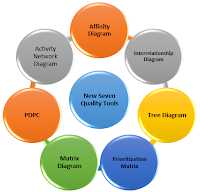 It is also known as the KJ method which was named after a Japanese anthropologist Jiro Kawakita.

It is a kind of brainstorming tool that organizes a large amount of disorganized data and information into groupings based on their natural relationships.

This diagram is useful where there are many facts or ideas in apparent chaos and issues seem to be too large and complex.

Similar to earlier cause and effect diagrams this tool helps to analyze the natural links between different aspects of a complex situation.

It is a systematic approach to break down broad categories into finer and finer details. This helps the thinking process to progress step by step from generalities to specifics.

This diagram shows the relationship between groups of information about strength and the role played by different individuals and measurements.

This is a complex mathematical technique for the analysis of matrices. This tool is often replaced by a similar but more rigorous decision-making tool known as a prioritization matrix.

This diagram shows the tasks to be performed in their required order. It also gives the best schedule for the entire project and potential scheduling and resource problems and their solutions.

This chart systematically identifies what might go wrong in a plan under development.

Different Types of Gears and Their Applications 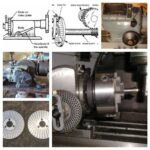