A lathe machine is used for rotating a workpiece in order to perform turning, facing, drilling, boring, etc. operations on the workpiece. Lathe machines have been used on woodworking, metal parts, and also on plastic nylon parts for a long time in the industry.

The machine consists of a bed with a movable arrangement. It consists of a holder to hold the desired tool in the desired position.
Chuck is attached to the spindle shaft in order to run the motor. The motor once powered transmits the power to the spindle through the belt drive mechanism, which is then used to rotate the chuck.
The machine is built to hold and rotate the workpiece and move the tool in a sliding mechanism, so as to achieve the desired operations.
The machine’s outer frame is designed to hold the workpiece firmly with the tool in place so as to achieve the desired operation with ease.

Let us study, each part of the mini-lathe machine in brief.

DC motors were widely used since they can be powered from existing direct-current lighting power distribution systems.
A DC motor’s speed can be controlled over a wide range, using either a variable supply voltage or by changing the strength of the current in its field windings. Small DC motors are used in tools, toys, and appliances.
The advent of power electronics has made the replacement of DC motors with AC motors possible in many applications.
Specifications of the motor:

A chuck is a specialized type of clamp. It is used to hold an object with radial symmetry especially a cylinder.
In the drilling machine and milling machine, it holds the rotating cutting tool whereas in lathe machines it holds the rotating workpiece. On the lathe machine, chuck is mounted on the spindle which rotates within the headstock. For some purposes, such as drilling, an additional chuck may be mounted on the non-rotating tailstock.
Chucks have jaws which are arranged radially symmetrical patterns like the points of a star. The jaws are tightened up to hold the tool or workpiece. A wrench like a tool called chuck key is used to tighten and loosen the jaws.

The sliding frame is an elliptical welding construction made from solid steel and specially developed as a silo discharge system for very difficult flowing bulk material. Through the back and forth movement of the sliding frame, the stored product is compulsively transported to one or more discharge screw conveyors.
The sliding frame is moved back and forth by means of a hydraulic cylinder mounted outside the silo. The cylinder is activated by means of a compact hydraulic unit.

A bearing is a machine element that constrains relative motion to only the desired motion, and reduced friction between moving parts.

Most bearings facilitate the desired motion by minimizing friction. Bearings are classified broadly according to the type of operation, the motions allowed, or to the directions of the loads, forces applied to the parts.
Rotary bearings hold rotating components such as shafts or axles within mechanical systems and transfer axial and radial loads from the source of the load to the structure supporting it.
Also read:

A nut is a type of fastener with a threaded hole. Nuts are almost always used in conjunction with a mating bolt to fasten multiple parts together.
In applications, where vibration or rotation may work a nut loose, various locking mechanisms may be employed such as lock washers, jam nuts, specialist adhesive thread-locking fluid such as Loctite, safety pins or lockwire in conjunction with castellated nuts, nylon inserts or slightly oval-shaped threads.

A tool bit is a non-rotary cutting tool used in metal lathes, shapers and planers. Such cutters are also often referred to by the set-phrase name of the single-point cutting tool, as distinguished from other cutting tools such as saw or water jet cutter.
The cutting edge is ground to suit a particular machining operation and may be resharpened or reshaped as needed. The ground tool bit is held rigidly by a tool holder while it is cutting.

A lathe machine is a machine tool that holds a workpiece between two rigid and strong supports called centers or in a chuck or faceplate which revolves. The cutting tool is rigidly held and supported in a tool post which is fed against the revolving work.
The normal cutting operations are performed with the cutting tool fed either parallel or at right angles to the axis of the work.

Operations performed on a lathe machine is as follows: 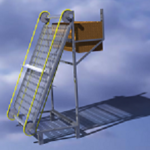 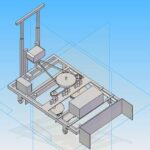 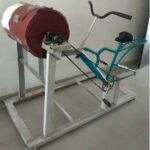 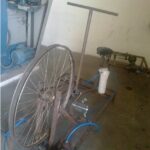 2 thoughts on “Design And Fabrication of Mini Lathe Machine”